What Do You Know About Dyslexia? Get All the Facts 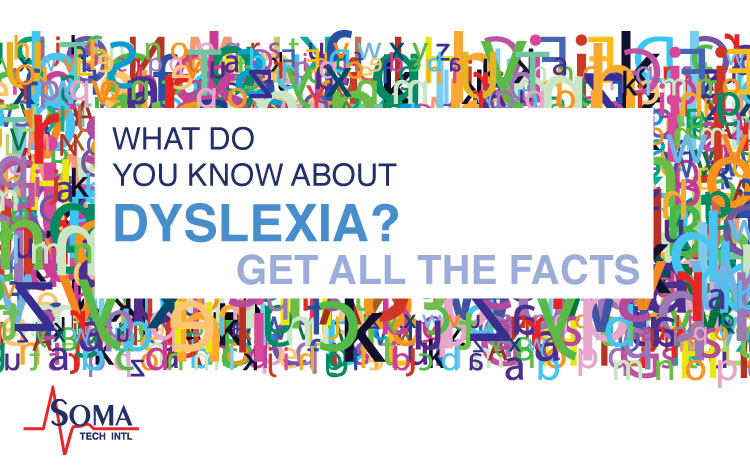 Dyslexia is a learning disorder that involves difficulty with reading and interpreting words. It can affect spelling, reading paces, reading comprehension, and writing. However, dyslexia is a learning disorder and there is no connection between dyslexia and overall intelligence. It affects between 5% to 15% of Americans and about 20% of the population. October is also Dyslexia Awareness Month and we wanted to bring attention to and support children and adults with dyslexia. While there is no cure for dyslexia, individuals can develop coping strategies that allow them to be successful and navigate different challenges they experience.

While genes and brain differences play a role in dyslexia, we still don’t know what causes it. Dyslexia has been studied for many years; the first traces of dyslexia were actually in the late 1800s. While discoveries have improved and have helped determine dyslexia today, we still haven’t been able to pinpoint any exact causes. Genes seem to play a big part since dyslexia is known as a hereditary trait that can run in families. For every child with dyslexia, 40% of siblings also have trouble reading. Parents with a child who has dyslexia also have a 49% chance that they have dyslexia, too.

Brain anatomy and activity are another way researchers have been studying dyslexia. Through brain imaging studies they can see differences between people with and without dyslexia. One of the differences occurs in the area of the brain responsible for reading skills and knowing how sounds are represented in words. While we still don’t know the causes, we have been making vast strides in researching dyslexia in recent years.

While there is no cure for dyslexia, there are treatments that have shown significate results. Early detection and evaluation also help to help kids with dyslexia learn to read at an early stage in their life. A lot of the techniques have to be practiced by surrounding family and peers. Including educational programs, where teachers can do to help children with dyslexia. Tutoring lessons with a specialist or individual education plans can also help. Did you know that in the United States, schools have a legal obligation to take steps to help children diagnosed with dyslexia with their learning problems? There are many ways that we can help children with dyslexia and even adults. As we learn more about dyslexia, treatments will also improve to better support those with dyslexia.

While dyslexia is considered a learning disorder, some people believe that dyslexia is a sign of higher intelligence. People with dyslexia think differently with their minds than those that do not have dyslexia. It’s all about how the brain is wired. Many famous people have had dyslexia and still had distinguished careers because of their way of thinking. Here are just some examples:

These are only a few people who had dyslexia, others include Leonardo Da Vinci, John Lennon, Gwen Stefani, Cher, Salma Hayek, Jennifer Aniston, and Steve Jobs. While they all had/have dyslexia, they didn’t let it stop them, instead, their brilliant and unique way of thinking brought them great success.

Help raise awareness this month for dyslexia. Do you or anyone you know have dyslexia? What have you learned about dyslexia from reading this? Let us know in the comments below to open up the conversation!