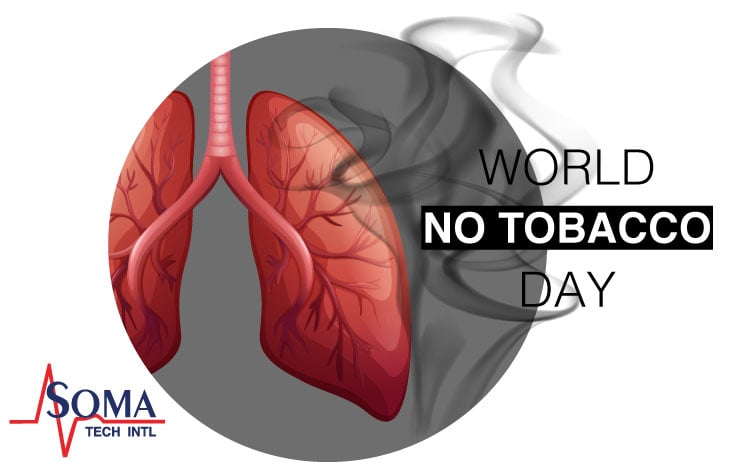 World No Tobacco Day informs the public of the dangers of using tobacco. The World Health Organization (WHO) is fighting against tobacco use and the companies that produce it.

Tobacco is a plant grown for its leaves, which are dried and then fermented. These leaves contain nicotine, which is addictive and can contain harmful chemicals when burned. Over 30 countries in the world grow tobacco but it is native to the Southwestern United States, Mexico, and a few parts of South America.

How is Tobacco Used?

Tobacco can be used in several ways, you can smoke, chew, and even sniff tobacco. Tobacco is found in cigarettes, cigars, bidis, and kreteks. It can also be smoked loosely in hookah or pipes. Another popular use is chewing tobacco, like snuff, dip, and snus. Recently there have also been e-cigarettes, also widely known as vapes, which contain nicotine, however, they do not contain tobacco.

Many people know that cigarettes are dangerous, but not cigars. The tobacco leaves themselves are very harmful in cigars and cigarettes. The tobacco leaves can grow in fields where they use specific fertilizers and soil. When burning the tobacco leaves, it gives off radioactive materials and when it is smoked, all those substances enter your body. This is one of the main reasons many people who smoke get lung cancer and other diseases.

Tobacco affects several parts of your body differently. Many believe that tobacco itself is not harmful, however, this is a myth. When you burn tobacco and inhale it, the fermentation that it goes through causes chemical and bacterial reactions. This is what gives cigars their different smell and taste from just normal cigarettes, but this doesn’t mean it’s safe. Because of the aging process that cigars go through, they contain nitrogen compounds and tobacco-specific nitrosamines (TSNA’s), which are directly related to cancer-causing substances. Even the wrapper around a cigar is different than cigarettes, and the wrapper leads to higher concentrations of nitrogen oxides, ammonia, carbon monoxide, and tar because the wrapper is less porous. The smoke that tobacco produces is known to have at least 70 different chemicals that are known to cause cancer. Some of the chemicals are but are not limited to: lead, arsenic, ammonia, benzene, carbon monoxide, formaldehyde, etc. On top of that, there is also nicotine which is dangerous because it is super addictive and can affect your brain. Cigarettes have an average of 8 milligrams of nicotine, while cigars have 100 to 200 milligrams of nicotine. One cigar can have as much nicotine as a pack of unfiltered cigarettes, if not more.

There are also smokeless tobacco products like snuff and chewing tobacco. The products are meant to be between your gums, cheeks, or lips. While you aren’t lighting up the leaves anymore like a regular cigar, this doesn’t make them any safer. These products still have about 30 chemicals that are related to causing cancer. Smokeless tobacco has been associated with many health problems such as:

The most commonly known tobacco product is cigarettes. Cigarettes used to be smoked everywhere and in some parts of the world they are still popular, but when we found the effects of cigarette smoking, as a society we have started to try to have younger generations stray away from cigarette smoking. Cigarettes are responsible for the most tobacco-related diseases and deaths in the United States. In other countries, they post pictures of lungs and hearts that have been affected by smoking cigarettes on the packages so that people are warned that this is what happens every time that they smoke.

Cigarettes are primarily tobacco, chemical additives, filters, and wrapping paper. They contain over 7000 dangerous chemicals when you inhale the smoke in cigarettes, and you can even make people around you sick with second-hand smoke. Smoking affects almost every organ in your body and can result in:

It also increases your risk of getting other diseases like tuberculosis and rheumatoid arthritis. There are over 16 million Americans right now living with a disease caused by smoking and for every person who dies from smoking, at least 30 others live with serious smoking diseases. With all the nicotine and how addictive cigarettes are, it is very hard for smokers to stop smoking before they suffer any serious health effects. Smoking causes more deaths than all of these causes combined: HIV, drug use, alcohol use, firearm-related incidents, and motor vehicle injuries. The risk of dying from cigarette smoking has increased significantly in the last 50 years.

Once you take that last puff, your body will start to recover once you stop smoking. Within a week you can feel the effects of being able to breathe better and the carbon monoxide levels in your blood will start to drop. One of the things that can help is trying to avoid your triggers. Whether it’s smelling one, seeing one, or sometimes drinking and even certain foods can make you crave it, so avoiding triggers for a while can help a lot once you quit. Many people try to quit “cold turkey” but this isn’t very successful, very few people can do this method. Things that could help are behavioral therapy, nicotine replacement therapy, and prescription medications. Others try acupuncture, laser therapy, or a combination of any of the above. You can even consult a doctor for ways to help you stop smoking to live a healthier life. Regardless of how you do it, it will help you and your health, especially the sooner you do it.