The Warning Signs of a Drug Overdose 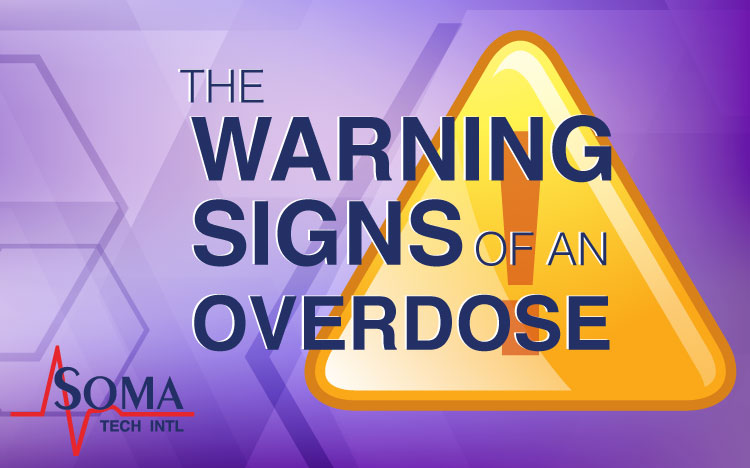 August 31st is known as International Overdose Awareness Day. Since 2001, government and non-government organizations raise awareness and commemorate those who have passed away from drug overdoses. Overdoses are one of the world’s worst public health crises. In the United States alone, over 91,000 people died from overdoses in 2020. Because of the rising numbers, this campaign is focusing on overdose prevention and new drug policies to put in place. It also helps families who have experienced a loss due to drug overdoses and gives them a safe space to mourn without guilt or shame.

What is an Overdose?

By definition, an overdose occurs when you take an excessive and dangerous amount of drugs. It can either be intentional or accidental, but both have very serious outcomes. It can be done with over-the-counter medicine, prescription drugs, or even illegal drugs. Opioids are the leading drug that causes overdoses and accounted for over 74% of all drug overdose deaths in 2020, according to the Centers for Disease Control and Prevention (CDC).

What Can You Overdose On?

You can overdose on any drugs. This includes over-the-counter drugs, prescription drugs, or illegal drugs. The mixing of these drugs also puts you at a higher risk of overdosing because many of them cannot be mixed. We have separated these drugs into different categories to better understand the effects that they have on the body and what they can put you at risk of.

• Alcohol
Alcohol is a depressant, but we have categorized it separately because many people do not think that you can overdose on alcohol. If you overdose on it, this is known as alcohol poisoning. This is usually a result of binge drinking. Alcohol poisoning occurs when your blood alcohol concentration (BAC) is dangerously high. If the level of alcohol in your bloodstream is too high, this can make your body stop functioning properly. If you do not get immediate medical attention, this can result in your body not being able to breathe, your heart could stop, or you can even choke on your vomit in your sleep. If any of these happen, they can result in serious medical problems and even death.

• Depressants
Depressants are drugs that slow the vital signs in the body such as breathing and heart rate. This includes drugs like opioids, benzodiazepines, barbiturates, and alcohol. Some of the most common names for some of these drugs are heroin, ketamine, Endone, Xanax, Valium, etc. All of these drugs slow down the central nervous system to produce a calming effect, which is why some are prescribed to relieve pain or used to make sleeping easier when prescribed by a doctor. However, if you overdose on any of these drugs, they can make breathing and your heart stop, which can result in death.

• Stimulants
Stimulants are drugs that speed up the messages between your brain and body, making you feel more awake, alert, and energetic. This includes amphetamines, cocaine, and ecstasy. Some of the more common names can be speed, ice, MDMA, Adderall, Ritalin, etc. Some of these drugs can be prescribed for medical reasons to treat ADHD and narcolepsy. However, overdosing on stimulants put you at risk for heart attacks, seizures, psychotic episodes, and all of these can result in death.

Symptoms of an Overdose

There are several different symptoms of an overdose. Everyone reacts differently and many factors can affect this, including the substance, amount, when it was taken, etc. Here is a list of some of the symptoms:
• Nausea and vomiting
• Severe stomach and abdominal pain
• Chest pain
• Dizziness and loss of balance
• Awake but unresponsive
• Seizures
• Erratic pulse
• Paranoia, agitation, and even hallucinations
• Choking or gurgling sounds while sleeping
• Difficulty breathing or not breathing at all
• Pale face
• Blue fingernails and lips
• Loss of consciousness

What to do if an Overdose Happens

An overdose is a medical emergency and needs medical attention. Many people are reluctant to call for help because of police involvement. However, police don’t show up unless there is a fatality or if the ambulance crew is in danger. You should immediately call for an ambulance so that paramedics can help the person that has overdosed. The faster that the person receives medical help, the higher their chances of surviving are. If the person is in a severe state, more than likely they will receive a shot of Naloxone. Naloxone is the drug that paramedics use to revive people who have had an opioid overdose. However, this exact drug can make you have withdrawal symptoms and gives you an urge to take more drugs that could have led to the original overdose. It’s important to understand the risk factors of Naloxone since it can lead to a second overdose due to withdrawals.

There are many ways to help raise awareness of drug overdoses. Spreading awareness is the best way to start. Whether it is just friends and family, it is always good to discuss drug safety and bring light to this important issue. You can also show your support by talking about this on social media to raise more awareness. You can even donate to campaigns and organizations that help raise awareness and help the families that have had a close relative overdose or who have suffered a loss from an overdose.