Tuesday Trivia: What’s Most Likely to Occur When Your Diaphragm Goes Into Spasms? 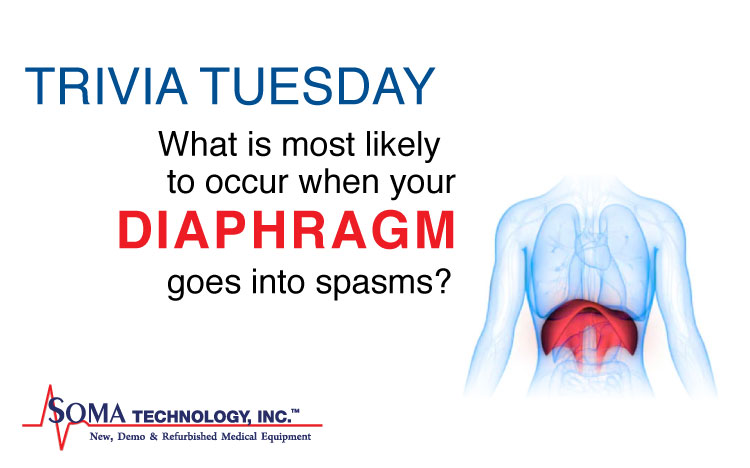 Tuesday Trivia: What’s most likely to occur when your diaphragm goes into spasms?

Diaphragm spasms are involuntary contractions of the muscle that divides your upper abdomen and your chest. Some people describe this as a twitch or fluttering sensation that can occur with or without pain. These spasms typically do not pose a serious health problem, but still can cause discomfort. Do you think you know the answer? Read more to find out!

During diaphragm spasms, it can force you to suddenly suck in air. When the air hits the voice box your vocal cords suddenly close and create that very well known “hic” sound.

In most cases, hiccups will go away within a few minutes or hours. If you experience hiccups for more than 2 days or even regularly get them, you should make an appointment with your doctor.

The world record for the longest hiccups is held by a man named Charles Osborne. He had the hiccups non-stop for about 68 years. It’s said that he damaged a small part of his brain that inhibits the hiccup response, after taking a fall in 1894. It’s estimated that he hiccuped over 430 million times in his lifetime. In the beginning, Osborne’s hiccups occurred around 40 times per minute. As he got older, they started to gradually slow down to about 20 hiccups a minute until they stopped in 1990, a year before his death.

Did you know why you get hiccups? How long do you usually have them? Could you imagine having them for 68 years? Leave a comment below with your answer. Do you have any ideas for other Tuesday Trivia or fun medical facts? Comment below!