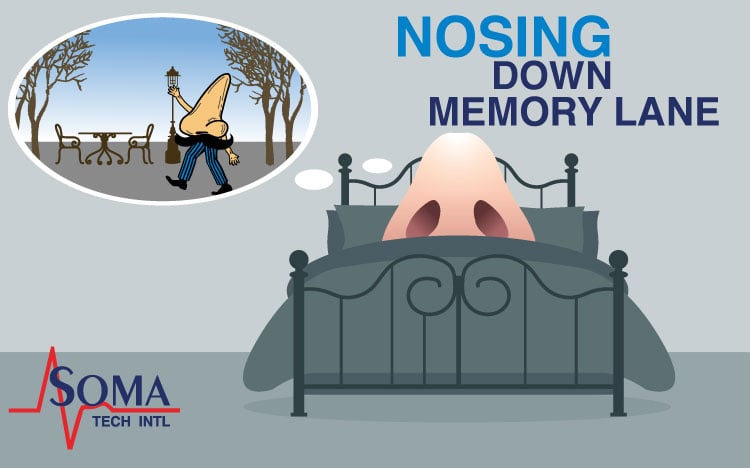 Think of your childhood home. Personally, at 28 years old, it has been long since I last graced the narrow earthly-toned house surrounded by a floating garden I call home. Perhaps for some readers it’s been more than a couple decades. In any case, the solidity and depth of detail you are able to conjure regarding how a place or thing looked becomes fuzzier through time. Now, what if you were to catch a whiff of that particular combination of spices your mom used when she made your favorite food—like Chiles Rellenos. Isn’t it strange that, in a certain way, we remember a place or person better through our sense of smell than through our other senses?

This power an olfactory experience has — to instantly transport the mind back to a specific place and time, and stir up such a specific swirl of emotions.

The human nose can remember 50,000 different scents, and experts say that the memories evoked by our sense of smell are some of the oldest and most potent we have. First and foremost, for a smell to be perceived by our noses has to be in a volatile (gaseous) state. This means that when we bend down to smell a flower, which is obviously a solid, what we’re actually inhaling is its radiated mixture of volatile odorants. It is these molecules that give us the sensation of a scent when introduced to our olfactory system. The odorants make their way up into our sinus and collide with what’s called the olfactory epithelium, a smallish, mucus-lined patch of tissue on the roof of the nasal cavity.

Once an odorant gets trapped in the mucus, it is picked up by the hair-like sensors of one of the millions of Olfactory Receptor Neurons (ORN’s), which then fires its unique signal up into the olfactory bulb. On the ends of each of these little hairs are the receptor proteins. These proteins are coded to bond with only one specific type of odorant molecule.

MEMORY INTO THE BRAIN

Though the smell data is utilized in many different parts of the brain, a select few play important roles in the context of olfactory memory. However, in order to talk about olfactory memory, here are a few important terms regarding memory in general.

Explicit memory is factual information that is deliberately and consciously encoded into short-term and/or long-term memory, such as “yesterday I had Honey Bunches of Oats for breakfast.” Implicit memory refers to skill-based information that is encoded automatically and without conscious effort. This is how we ultimately remembered how to ride a bike or tie our shoes. When it comes to olfactory memory, the frontal cortex is where we explicitly remember and label a smell, such as “this is the smell of fresh Columbian coffee.” Other parts of the brain, namely the Limbic System, are where we process the more implicit, often emotional memories associated with a particular smell.

When I was a young kid, my mom would have me close my eyes as she quizzed me on the names of various herb or spices. While expanding my explicitly-encoded olfactory database, my brain was automatically tying implicit, emotional memories to those smells. So now when I smell fresh epazote, my frontal cortex tells me “this is epazote”. Meanwhile, I’m also reminded of the golden years of childhood.

On the other end of the emotional spectrum, olfactory memory is also key to our more animalistic instincts for survival; an animal is more likely to survive and reproduce if it can identify the smoky smell of a nearby forest fire as “DANGER!” or sniff out its mother’s milk before it’s old enough to open its eyes. These primal urges that we associate with certain smells are processed mostly in our Amygdala.

Tucked into its own cozy nook of the ever-expanding library of our brain is our collection of olfactory memories. Some which are collected from early childhood. So, whether it’s the cleansing scent of dish soap, the warm smell of tortillas or chiles rellenos, the ominous odor of a lit firework fuse, or the comforting fragrance of a loved one’s perfume, your olfactory experiences are ever-present in everyday life.

Which smells from your childhood or recent years do you remember most fondly? Leave a comment below.