Sarcoma: What Is The Symptoms and Treatment 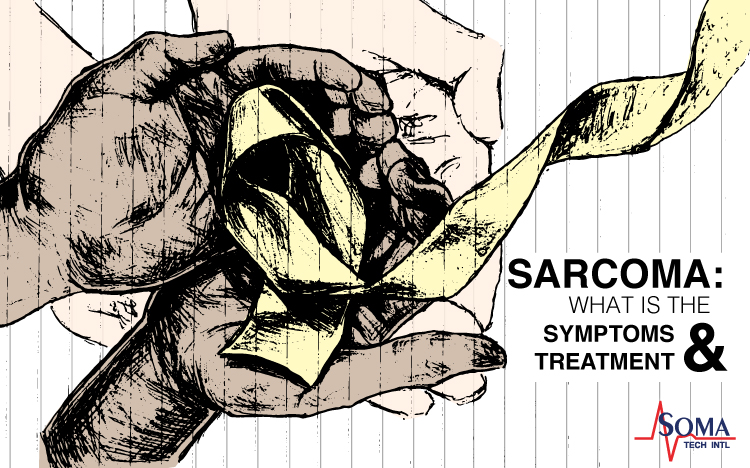 Have you ever heard of Sarcoma? Why do we have Sarcoma Awareness Month? Simply, sarcoma is still considered to be the “forgotten cancer.” Efforts to encourage research and drug development are made more challenging due to a lack of awareness and understanding. Continue reading further to learn more about the symptoms and treatments.

WHAT IS SARCOMA CANCER?

Sarcoma is a rare kind of cancer. Sarcomas are different from the much more common carcinomas because they happen in different kinds of tissue. Sarcomas grow in connective tissue — cells that connect or support other kinds of tissue in your body. These tumors are most common in the bones, muscles, tendons, cartilage, nerves, fat, and blood vessels of your arms and legs, but they can also happen in other areas of your body.

THE CAUSES OF SARCOMA CANCER

Unfortunately, scientists do not fully understand why some people develop sarcomas while the vast majority do not. However, by identifying common characteristics in groups with unusually high occurrence rates, researchers have been able to single out some indicators that may play a role in causing sarcomas.

The causes behind sarcoma are unknown, but there are some known risk factors. For instance, exposure to phenoxyacetic acid in herbicides or chlorophenols in wood preservatives may increase the risk. An unusual percentage of patients with a rare blood vessel tumor, angiosarcoma of the liver, for example, have been exposed to vinyl chloride in their work. This substance is used in the manufacture of certain plastics. High doses of radiation are also known to cause sarcomas in some people, as are certain rare genetic alterations.

Studies have focused on genetic alterations that may lead to the development of sarcomas. Scientists have also found a small number of families in which more than one member in the same generation has developed sarcoma. Sarcomas within families may be related to a rare inherited genetic alteration. However, in the vast majority of cases, sarcoma is a completely random event in a family’s cancer history.

Signs and symptoms of sarcoma include:

We don’t yet know what causes sarcoma, but we do know some things that raise the risk of developing one. When possible, you should avoid these risk factors:

Although a lot of the lumps and bumps we get are benign, people should have them looked at by a doctor at an early stage in case it is a sarcoma. Because sarcomas are difficult to distinguish from other cancers when they are found within organs, their occurrence is probably underestimated, according to the National Cancer Institute. In 2018, over 13,000 cases of soft tissue sarcoma and 3,400 cases of bone sarcomas are expected to be diagnosed in the United States, according to data from the National Cancer Institute’s Surveillance, Epidemiology, and End Results Program (SEER).

The only reliable way to determine whether a tumor is benign or malignant is through a surgical biopsy. Therefore, all soft tissue and bone lumps that persist or grow should be biopsied. During this procedure, a doctor makes an incision or uses a special needle to remove a sample of tumor tissue, and a pathologist examines the tissue under a microscope. If cancer is present, the pathologist can usually determine the type of cancer and its grade. Low-grade sarcomas, although cancerous, are unlikely to metastasize. High-grade sarcomas are more likely to spread to other parts of the body. The five-year survival rate for soft tissue sarcomas is 50 percent, while the survival rate is 66 percent for bone sarcomas.

The Sarcoma Foundation of America (SFA) estimates that about 20% of sarcoma cases are curable by surgery while another 30 percent may be effectively treated with surgery, chemotherapy, and/or radiation. In general, treatment for sarcomas depends on the stage of cancer. The stage of the sarcoma is based on the size and grade of the tumor, and whether cancer has spread to the lymph nodes or other parts of the body (metastasized).

Doctors are conducting clinical trials in the hope of finding new, more effective treatments for sarcomas, and better ways to use current treatments.

Sarcoma Awareness Month aims to further highlight the extraordinary challenges that sarcoma patients face, and provides information about the need for more sarcoma research and better therapies. Did you find this article helpful and informative? Have you or a loved one been or (currently) diagnosed with sarcoma? Please feel free to share your story and comments down below!