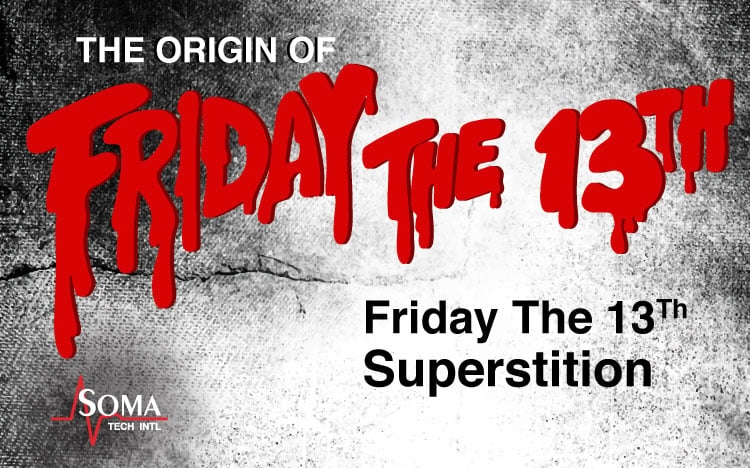 Humans have always been fascinated with the numbers and idea that certain numbers carry a deeply spiritual, esoteric, or occult significance. When it comes to experiencing bad luck, superstitions – crossing paths with a black cat or breaking a mirror – are pervasive throughout Western culture. One, in particular, is widely known as none other than Friday the 13th. Did you know that there is a name to describe the irrational dread of this date? Paraskevidekatriaphobia, a specialized form of triskaidekaphobia, is a fear of number 13.

What is so threatening about Friday, though? Why does the simple act of combining the greatest weekday with the most mythologized prime number strike such fear in our hearts?
Let us go deeper into unraveling the ominous history and meaning of Friday the 13th.

HISTORY OF FRIDAY THE 13TH

Like many superstitions that have evolved over time and across cultures, it is difficult to pinpoint the precise origins of Friday the 13th. Both Friday and the number 13 have been regarded as unlucky in certain cultures throughout history. In Norse mythology, Loki, the god of mischief gate-crashed a banquet in Valhalla, bringing the number of gods in attendance to 13. Deceived by Loki, the blind god Hodr was tricked into shooting his brother Balder, the god of light, joy, and goodness with an arrow. From Scandinavia, the superstitions then spread south throughout Europe, becoming well-established along the Mediterranean by the start of the Christian era. Here, the unsettling numerals were cemented through the story of the Last Supper and the 13th and most infamous guest to arrive, Judas Iscariot – the betrayer.

The union of the day and date has also been traced back to King Philips IV of France arrested hundreds of the Knights Templar on Friday, October 13, 1307. The Catholic crusaders were apprehended due to allegations made by an excommunicated former member that recruits were spitting on the cross, denying Christ, and engaging in homosexual acts during initiation ceremonies. Charged with moral, financial corruption, and worshiping false idols, often following confessions obtained under torture, many of the knights were later burnt at the stake in Paris.

WHY IS THE NUMBER 13 UNLUCKY?

Certain numbers attract dark superstitions – such as the “devil’s number,” 666. The number 13 may be the darkest of them all, however. For most of recorded human history, the number 13 was associated with Jesus and his 12 disciples, with Judas being received as the 13th guest. Ultimately, Judas’s betrayal led to Jesus’s crucifixion on Good Friday. The story of the last supper also coincides with a similar story in the Norse myth of Loki. Ever since Loki and Judas, the idea of “the 13th guest” has long been considered sinister. Over the centuries, the fear of and eagerness to avoid the number 13 essentially became one of humanity’s longest-running memes.

By the 19th century, Friday the 13th became synonymous with misfortune. It was during this time that the early skyscrapers were being built without the 13th floor. Additionally, men were defiantly forming “Thirteen Clubs” societies meant to defy the odds and debunk the superstition that was placed for centuries.

The 19th century was full of references to the number 13 being unlucky. However, it took until the 20th century to bring us the Friday the 13th we know today. That is largely due to Thomas Lawson who in 1907 published his notorious novel “Friday, the Thirteenth”. The plot centralizes on a fictional stockbroker who chooses that day to deliberately crash the stock market. It’s only a year later that we see the first known mention of Friday the 13th in the media: notice in the New York Times from March 14, 1908, notes that one brave senator had defied the odds and “introduced thirteen public building bills” into the Senate on an unlucky day.

From there, the myth around the day continued to build, as myths typically do. Fast-forward to the 1980s, and the beginning of the Friday the 13th movie franchise, the superstition was firmly in place. Resulting in the birth of the franchise’s villain – Jason Voorhees. How weird is it that the Friday the 13th film series has just under 13 films?

WHEN IS THE NEXT FRIDAY THE 13th?

Here is the following date for the next Friday the 13th:

In Greece and various Spanish-speaking countries, it is Tuesday the 13th that frightens people’s hearts. While in Italy, it is Friday the 17th that is usually associated with bad luck.

Nothing says spooky quite like Friday the 13th—that quirky day when all our superstitions and phobias come out. The fears of the date have not been forgotten in the modern era. Whether you choose to meet the ill-fated date by superstition flouting actions, perhaps petting a black cat while sitting under a ladder, or willing away the date at home waiting for the day to end, either way, you are part of the traditional and lore that has been around for thousands of years.

As Halloween is approaching, which iconic horror film franchise makes you jump out of your seat the most? Are you superstitious? Has anything weird ever happened to you on this unlucky day? Leave us a comment below!