When Can Babies Drink Water? 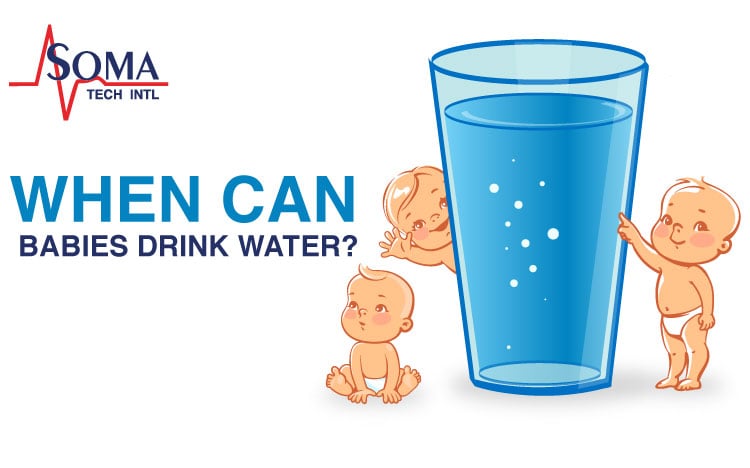 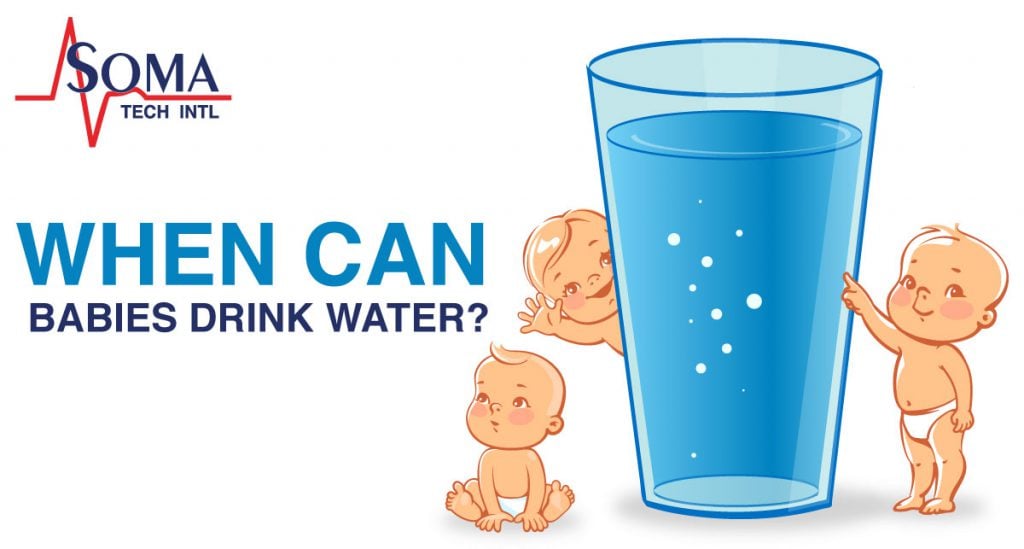 When can babies drink water?

You likely already know that water is the healthiest drink for kids and adults when they’re thirsty but what about babies?  It turns out that babies actually don’t need water and generally should be at least six months or older before being given a few sips of water at a time.  This recommendation is somewhat counterintuitive so let’s break down the reasons why

The primary reason not to give an infant water is simply that they don’t need it:  a baby that is well-fed, whether with breast milk or formula, will get all the hydration they need from their food source.  For example, breast milk is more than 85% water so it’s able to provide all the nutrition and hydration that a baby will need.  Because both formula and breast milk are able to do double duty in this way, giving water to an infant will only fill them up without providing them with any of the calories and nutrients they need to keep growing.  As an illustration, a newborn’s stomach can only hold one to two teaspoons at a time, while a one month old’s stomach capacity is around a half of a cup, and by the time they’re six months old, and it’s generally safe to begin introducing water, they can hold close to a cup at a time.  So in those early months, even just a sip of water could completely fill their stomach, leaving no room for the nutrition they need!

What about on hot days when older kids and adults are guzzling water to stay hydrated?  Multiple research studies have shown that even on extremely hot, dry days, babies are still able to maintain appropriate hydration levels via either breast milk or formula.  As long the infant is allowed to nurse or feed from a bottle as needed, there is no need to supplement with additional water.

Believe it or not, drinking too much water too quickly can lead to something called water intoxication where your kidneys can’t handle the volume of water and all the excess water ends up in your bloodstream, lowering the concentration of electrolytes, especially sodium.  This electrolyte imbalance can lead to headaches, muscle cramps, vomiting, fatigue and, in severe cases, seizures or loss of consciousness.

Some signs that your baby may have had too much water include:

If you notice any of these symptoms in an infant, take them to the hospital immediately.

The amount of water one would need to drink to encounter problems varies greatly based on their age and size.  So while a healthy adult would need to drink several liters of water in a relatively short period of time to develop water intoxication, not surprisingly, this threshold is much, much lower for infants.  To make matters worse, babies’ kidneys are less developed than an adult’s so they can’t process as much water, even when taking their smaller size into account.

In addition to the risk of water intoxication, giving water to newborns can lead to other health issues; for example, water supplements have been associated with increased bilirubin levels and longer hospital stays for newborns.

When to Start Incorporating Water into a Baby’s Diet

It’s generally best to wait until a baby is around 6 months old and they are introduced to solid food.  Even here, they will still get most of the hydration and nutrition they need from formula or breast milk so the additional water is mostly to prevent constipation, which is more likely to happen now that their digestive system is trying to digest solid food for the first time.  By the time they’re 6 months old, an infant’s kidneys should also now be developed enough that water intoxication is less of a concern, so offering them around a half cup of water per day should not lead to any problems.  However, caregivers should not be surprised if the baby drinks only a little water at first as not only will they be well hydrated from their usual breast milk or formula but also because it’s a new taste that will likely take them some time to get used to.  When offering water it’s best to offer it in a cup as this will get them used to drinking in this way, helping them to build the motor and swallowing skills for when they will get all their fluids from cups instead of bottles.  Additionally, because they haven’t yet mastered drinking, and swallowing, from a cup, providing them with water in this way will help ensure that they don’t drink an unhealthy amount of water at a time.