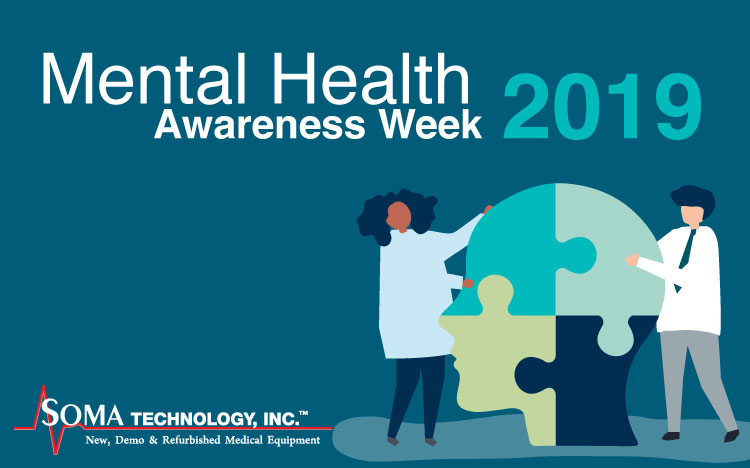 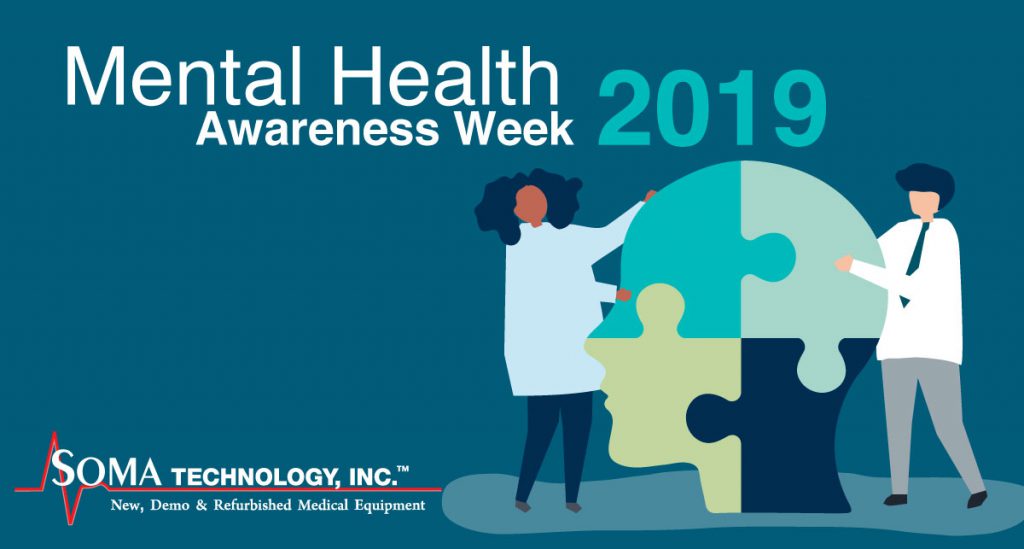 October is the month for many different types of health awareness holidays such as breast cancer, healthy lung month, Down Syndrome and Mental Health Awareness Week 2019. The general social rule for talking about mental health disorders to anyone is to only present the facts and to be very sensitive to others’ feelings and thoughts. We are going to try that same approach to eliminate the stigma that unfortunately exists around mental health. With this awareness week, we are actively seeking to explain exactly what mood disorders and mental illnesses are the most common in the population, and to alleviate the fear of individuals having these issues. Continue reading to learn more about mental health issues and how we can all work together to eliminate the stigma.

What is a Mental Illness or a Mood Disorder?

Depression is one of the most common mental health issues in the United States and in the world. Depression is when the brain does not produce enough serotonin – the feel-good hormone that the body releases that makes us feel safe and content. People with depression may not be easily noticed. They can be pretty good at hiding their emotions. Depression manifests in different ways. Individuals with depression can either feel restless or exhausted, stressed out, feelings of worthlessness, and like they don’t matter. Most depressive cases are treated by anti-depressants, or through cognitive behavior therapy. The severe thing to notice in individuals are the warning signs for suicidal behaviors. These include suicidal ideations, talking about death and dying, giving away possessions, or selling their property. If you think that you or someone you may know is suicidal, please call 1-800-273-8255, this is the national suicide prevention hotline number. It is important to know that there is always someone listening and that life is worth living.

What is Seasonal Affective Disorder?

Being from the northeast, Seasonal Affective Disorder is one of the most common issues that plague us from about September to April. The shortening of sunlight exposure and vitamin D deficiency leaves most people feeling tired and slightly depressed. People may also feel agitated, irritated, and sluggish during the colder months. Some people have remedied this through buying a happy lamp, or a white light machine that mimics the effects of sunlight. Please talk to your doctor if you have more questions about SAD, and please read why you are more sleepy in the winter.

What is General Anxiety and Panic Disorder?

General anxiety is when people often feel worrisome, and feel like they can not control their actions. This is different than OCD like tendencies in which people may try to perform rituals or patterns in the hopes that they can control their present and future. People with anxiety may feel uncomfortable or weird when in public, or even by themselves. Their anxiety can manifest in insomnia, general uneasiness, intestinal issues, feelings of nausea, or feeling dizzy. Some people who have severe anxiety may also have panic disorder. This is when they get a panic attack when they think about a certain situation that gives them an exorbitant amount of anxiety. Panic attacks do not all look the same, and vary from person to person. One person’s heart rate may climb, and they may be completely silent while they feel that their mind is going a mile a minute. Another person may have a more physical attack in which they start pacing, running, having the adrenaline fill their body. They may also start hyperventilating, screaming, or trying to hurt themselves. While it may seem like a good idea to try to stop the panic attack, they usually do not last longer than 15 minutes and will eventually subside. If the person feels like they are going to die, that is normal, but perhaps it may be best to bring them to an emergency room for further evaluation. Anxiety is incredibly common.

What is Bipolar Disorder?

There are many people who suffer from eating disorders. People who have these often feel like they are not in control of their life, so they need to control their feelings through what they put into their bodies. Some are afraid of gaining weight due to societal pressures, and some punish their bodies for eating. For those that overeat, they just have a poor connection with food usually based on traumatic experiences. Eating disorders are highly treatable and if you think you may have one, please make an appointment with a therapist. The warning signs are people who may spend too much time in the bathroom after eating – anorexia nervosa and bulimia, or bulimia when people are hoarding snacks in their room in secret. There is actually a relatively new eating disorder called Orthorexia. This is described as someone who only eats what they believe to be clean foods, and over exercises.

Celebrities with a Mental Illness

There are many celebrities who have a mental illness or a disorder. About 1 in 4 people will have a mental health issue at some point in their life, so it is incredibly common.

Ways to Mitigate Stressors that Can Trigger Episodes

It has been known for a while that there is a large connection to the amount of stress that we carry and the likelihood that an episode will act up. There are many things that people can do to mitigate their stress and the likelihood that they will trigger their disorder. The following are ideas that have been proven to reduce stress and make people’s moods slightly improve.

After reading this article do you feel as though you are better versed in mental health awareness? Is there a disorder or illness that you either have some experience dealing with or treating? Are there any tips that we missed on our post? Is there another topic that you think we should write a blog article about? Comment below!