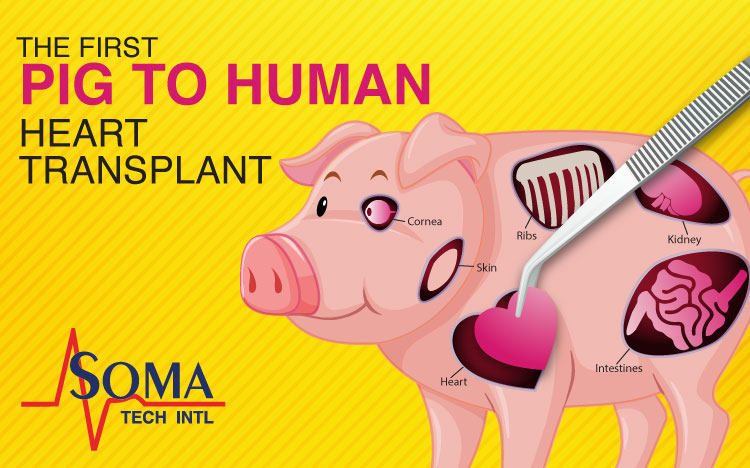 On January 7th, a 57-year-old male patient received a genetically-modified pig heart transplant at the University of Maryland Medical Center (UMMC). The surgery was the “world-first” and deemed the patient‘s only chance of survival after he was declared unsuitable for a human donor transplant or an artificial heart pump. Continue reading further to learn more about this historical and significant pig-to-human heart transplant procedure.

WHY USE A PIG HEART?

Have you ever wondered why pigs are often used to dissect and study in biology and anatomy/ physiology classes? Pig hearts are very similar in size, anatomy, and function to human hearts. Therefore, pig hearts are used to train medical students. Porcine hearts are the gold standard in pre-clinical animal testing for all cardiovascular devices before use in humans to both tests the safety, efficacy, and refinement of implant procedures.

Regardless of the similarities in size between both human and a pig’s heart, there are considerable differences:

WHEN WAS THE FIRST PIG HEART TRANSPLANT?

On January 10, 2022 – the University of Maryland School of Medicine (UMSOM) and the University of Maryland Medical Center (UMMC) announced the first successful transplant of a genetically modified pig’s heart into a human patient. The 57-year old patient, David Bennett, from Maryland had advanced heart failure and had been deemed ineligible for a conventional heart transplant at UMMC as well as other leading transplant centers. He was on ECMO for life support and was not expected to leave the hospital alive.

Porcine pig heart transplants are not approved by the U.S. Food and Drug Administration (FDA). However, the federal agency authorized the surgery in the case for “compassionate use” as no other options remained for Mr. Bennett. Revivor, a regenerative medicine company based in Blacksburg, VA, provided the genetically modified pig to the xenotransplantation laboratory at UMSOM. On the morning of the transplant surgery, the surgical team removed the pig’s heart and placed it in the XVIVO Heart Box perfusion device, which kept the heart preserved until the surgery.

HOW DID SCIENTISTS PULL OFF THE FIRST PIG HEART TRANSPLANT?

Xenotransplantation risks provoking rejection, an immune response in the recipient that can cause the organ from another species to fail. A key problem is that antibodies produced by people recognize certain sugars on the surface of pig cells as foreign. You need to get rid of as much antibody binding as you can upfront to get the graft to survive longer. So, in one of its lines of engineered pigs, Revivor knocked out three genes for enzymes that enable pig cells to synthesize those sugars.

Six tweaks were additions of human genes: two anti-inflammatory genes, two genes that promote normal blood coagulation and prevent blood vessel damage, and two other regulatory proteins that help tamp down antibody response. Lastly, the final modification removed the gene for a growth hormone receptor to reduce the chance that a pig organ, roughly matched in size to the patient’s chest, will outgrow it once implanted.

RESULTS AFTER THE PROCEDURE?

According to hospital officials, Mr. Bennett’s transplant was initially deemed successful. It is still considered a significant step forward, because the pig’s heart was not immediately rejected and continued to function for well over a month, passing a critical milestone for transplant patients. Mr. Bennett spent time with his family, did physical therapy, and watched the Super Bowl. Eventually, two months after the groundbreaking experiment, his condition started to deteriorate. Rejection, infection, and other complications are risks for transplant recipients. However, Mr. Bennett survived significantly longer with the gene-edited pig heart than one of the last milestones in xenotransplantation — when Baby Fae, a dying California infant, lived 21 days with a baboon’s heart in 1984.

The need for another source of organs is huge. More than 41,000 transplants were performed in the U.S. last year, a record — including about 3,800 heart transplants. More than 106,000 people remain on the national waiting list and thousands die every year before getting an organ. Mr. Bennett’s contribution to medical science gives hope to potentially save patient lives in the future. We hope this historic pig to human heart transplant can be the beginning of hope and not the end. We also hope that what was learned from his surgery will benefit future patients and hopefully one day, end the organ shortage that costs so many lives each year. What were your thoughts about this article? Is there anything else that you would like us to write about? Feel free to leave your comments below!